We’re officially in that season that I like to call “between Turkeys.” By now the Thanksgiving leftovers are a distant memory but the end of December brings us another round of big birds, grand roasts and other big banquet entrees.

So it’s nice to squeeze in some meals that are lighter and seafood based. I was rummaging in my freezer and found a big piece of wild salmon that I stocked up on when it was in season and on sale. It made a decent dinner but I had a lot of leftovers and wanted to have a little fun (and a lot of vegetables) with it.

I had greatly overestimated my family’s love of green beans, so I had a couple bags of fresh beans in the crisper drawer that were rapidly coming up on their expiration date. So, too, was the plastic clamshell of spring mix.

I had baked too many potatoes the night before, so there was one cooling its heels in the fridge as well. And since I finally perfected making hard-boiled eggs after a lifetime of overcooking them (place eggs in pot, cover with cold water, bring to boil, remove from heat, let sit exactly 12 minutes, plunge into ice water!) I had a bunch of eggs ready to go in the fridge.

Hmmm … green beans, eggs, potato … nicoise! Traditionally, the French nicoise salad is made with tuna but I used the cooked salmon instead and had a meal that was tres magnifique!

Salad nicoise is one of my favorite quick meals because you really can dump in whatever you have lying around the fridge. Plus it’s a complete meal; everything’s there — protein, carbs, healthy fats and a load of veg.

Gee, that doesn’t sound too French and elegant, but it’s true! It looks pretty when all the ingredients are nestled next to each other, but before you eat it, make sure you chop everything up so you get a little bit of everything in each bite. 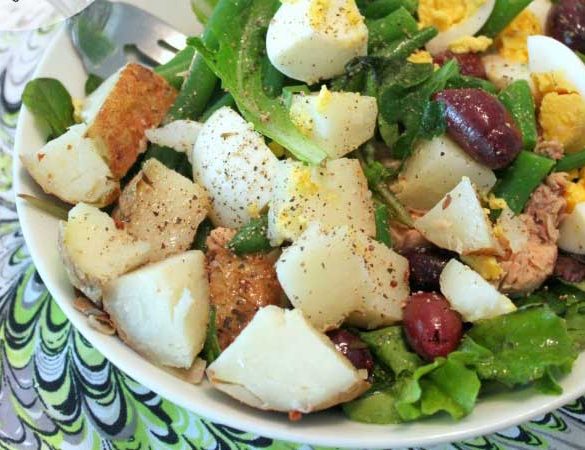